Chinese New Year is a Chinese festival that celebrates the beginning of a new year on the traditional Chinese calendar. The festival is usually referred to as the Spring Festival in modern China, and is one of several Lunar New Years in Asia. Observances traditionally take place from the evening preceding the first day of the year to the Lantern Festival, held on the 15th day of the year. The first day of Chinese New Year begins on the new moon that appears between 21 January and 20 February. In 2019, the first day of the Lunar New Year will be on Tuesday, 5 February, initiating the Year of the Pig.

Brothers Yu, Hua — A bestseller in China, recently short-listed for the Man Asian Literary Prize, and a winner of France’s Prix Courrier International, Brothers is an epic and wildly unhinged black comedy of modern Chinese society running amok. Here is China as we’ve never seen it, in a sweeping, Rabelaisian panorama of forty years of rough-and-rumble Chinese history that has already scandalized millions of readers in the author’s homeland.

Beijing coma Ma, Jian —  At once a powerful allegory of a rising China, racked by contradictions, and a seminal examination of the Tiananmen Square protests, Beijing Coma is Ma Jian’s masterpiece. Spiked with dark wit, poetic beauty, and deep rage, this extraordinary novel confirms his place as one of the world’s most significant living writers.

The bonesetter’s daughter / Amy Tan. —The story begins when Ruth Young, a

ghostwriter of self-help books, comes across a clipped stack of papers in the bottom of a desk drawer. Young has been caring for her ailing mother, LuLing, who is beginning to show the unmistakable signs of Alzheimer’s disease. Written in Chinese by LuLing years earlier, when she first started worrying something was wrong with her memory, the papers contain a narrative of LuLing’s life as a girl in China, and the life of her own mother, the daughter of the Famous Bonesetter from the village of Xian Xin – Immortal Heart – near the Mouth of the Mountain.

The ghost bride : a novel / Yangsze Choo. — Yangsze Choo’s stunning debut, The Ghost Bride, is a startlingly original novel infused with Chinese folklore, romantic intrigue, and unexpected supernatural twists. Li Lan, the daughter of a respectable Chinese family in colonial Malaysia, hopes for a favorable marriage, but her father has lost his fortune, and she has few suitors. Instead, the wealthy Lim family urges her to become a “ghost bride” for their son, who has recently died under mysterious circumstances. Rarely practiced, a traditional ghost marriage is used to placate a restless spirit. 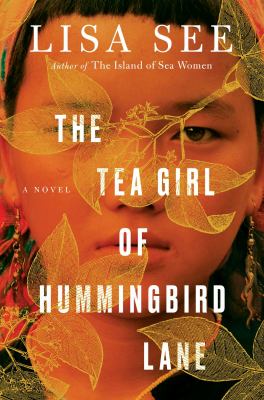 The tea girl of Hummingbird Lane / Lisa See. — A thrilling new novel from #1 New York Times bestselling author Lisa See explores the lives of a Chinese mother and her daughter who has been adopted by an American couple. Li-yan and her family align their lives around the seasons and the farming of tea. There is ritual and routine, and it has been ever thus for generations. Then one day a jeep appears at the village gate–the first automobile any of them have seen–and a stranger arrives. In this remote Yunnan village, the stranger finds the rare tea he has been seeking and a reticent Akha people. In her biggest seller, Snow Flower and the Secret Fan, See introduced the Yao people to her readers. Here she shares the customs of another Chinese ethnic minority, the Akha, whose world will soon change.

Snow flower and the secret fan : a novel / Lisa See. — Snow Flower and the Secret Fan is a brilliantly realistic journey back to an era of Chinese history that is as deeply moving as it is sorrowful. With the period detail and deep resonance of Memoirs of a Geisha, this lyrical and emotionally charged novel delves into one of the most mysterious of human relationships: female friendship.

Crazy rich Asians: Crazy Rich Asians Series, Book 1 /Kevin Kwan— When New Yorker Rachel Chu agrees to spend the summer in Singapore with her boyfriend, Nicholas Young, she envisions a humble family home and quality time with the man she hopes to marry. But Nick has failed to give his girlfriend a few key details. One, that his childhood home looks like a palace; two, that he grew up riding in more private planes than cars; and three, that he just happens to be the country’s most eligible bachelor.

The fat years: a novel / Guanzhong Chen–Banned in China, this controversial and politically charged novel tells the story of the search for an entire month erased from official Chinese history.   Beijing, sometime in the near future: a month has gone missing from official records. No one has any memory of it, and no one could care less–except for a small circle of friends, who will stop at nothing to get to the bottom of the sinister cheerfulness and amnesia that have possessed the Chinese nation. When they kidnap a high-ranking official and force him to reveal all, what they learn–not only about their leaders, but also about their own people–stuns them to the core. It is a message that will astound the world. A kind of Brave New World reflecting the China of our times, The Fat Years is a complex novel of ideas that reveals all too chillingly the machinations of the postmodern totalitarian state, and sets in sharp relief the importance of remembering the past to protect the future.

The Joy Luck Club / Amy Tan — In 1949, four Chinese women–drawn together by the shadow of their past–begin meeting in San Francisco to play mah jong, invest in stocks and “say” stories. They call their gathering the Joy Luck Club–and forge a relationship that binds them for more than three decades. A celebrated novel in the tradition of Alice Adams and Margaret Atwood from the bestselling author of The Kitchen God’s Wife.

Shanghai girls: A Novel / Lisa See — In 1937, Shanghai is the Paris of Asia, a city of great wealth and glamour, the home of millionaires and beggars, gangsters and gamblers, patriots and revolutionaries, artists and warlords. Thanks to the financial security and material comforts provided by their father’s prosperous rickshaw business, twenty-one-year-old Pearl Chin and her younger sister, May, are having the time of their lives . . . until the day their father tells them that he has gambled away their wealth and that in order to repay his debts he must sell the girls as wives to suitors who have traveled from California to find Chinese brides. In Los Angeles they begin a fresh chapter, trying to find love with the strangers they have married, brushing against the seduction of Hollywood, and striving to embrace American life even as they fight against discrimination, brave Communist witch hunts, and find themselves hemmed in by Chinatown’s old ways and rules.

Hotel on the corner of bitter and sweet: A Novel / Jamie Ford — When artifacts from Japanese families sent to internment camps during World War II are uncovered during renovations at a Seattle hotel, Henry Lee embarks on a quest that leads to memories of growing up Chinese in a city rife with anti-Japanese sentiment.

The last empress /Anchee Min — The last decades of the nineteenth century were a violent period in China’s history marked by humiliating foreign incursions and domestic rebellion, ultimately ending in the demise of the Ch’ing dynasty. The only constant during this tumultuous time was the power wielded by one person, the resilient, ever-resourceful Tzu Hsi, Lady Yehonala — or Empress Orchid, as readers came to know her in Anchee Min’s critically acclaimed novel covering the first part of her life. The Last Empress is the story of Orchid’s dramatic transition from a strong-willed, instinctive young woman to a wise and politically savvy leader who ruled China for more than four decades. Moving from the intimacy of the concubine quarters into the spotlight of the world stage, Orchid must face not only the perilous condition of her empire but also a series of devastating personal losses, as first her son and then her adopted son succumb to early death. Yearning only to step aside, and yet growing constantly into her role, only she–allied with the progressives, but loyal to the conservative Manchu clan of her dynasty–can hold the nation’s rival factions together.